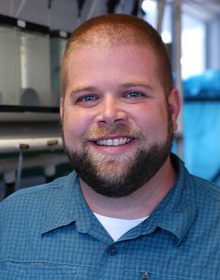 Dr. Joseph Bisesi is an assistant professor of the Department of Environmental and Global Health and a member of the Center for Environmental and Human Toxicology and the Emerging Pathogens Institute at the University of Florida. He received his B.S. and M.S. in Biological Sciences, and his Ph.D. in Environmental Toxicology from Clemson University in 2005, 2007, and 2011, respectively. He then completed his post-doc at the University of Florida, where he studied molecular toxicology. Dr. Bisesi then joined the Department of Environmental and Global Health in 2014. In addition to his teaching and research program, Dr. Bisesi currently serves as the program director for Ph.D. and Masters Programs.

Dr. Bisesi’s training is grounded in environmental toxicology with a focus on studying the effects of waterborne toxicants in humans and aquatic organisms. His dissertation research was focused on understanding the impacts of antidepressants on the brain biochemistry and feeding behavior of aquatic organisms. Additional training in the examination of molecular mechanisms of toxicants in mammalian and fish models allows Dr. Bisesi to work across human health toxicology and ecotoxicology to address complex public and environmental health issues related to environmental contaminants. Dr. Bisesi’s current research program is focused on elucidating the effects and toxic mechanisms of numerous emerging contaminates, including nanomaterials, plasticizers, and pharmaceuticals as well as legacy contaminants of concern including pesticides and heavy metals. Much of his research is focused on the gastrointestinal system, which is an understudied target of chemical contaminants. His research has been published in numerous high impact environmental journals including Environmental Science and Technology, Environmental Toxicology and Chemistry, and Environmental Science: Nano. His research has been funded by the National Science Foundation.

Dr. Bisesi current projects include: probing the contributions of phthalate plasticizers to the obesity epidemic using zebrafish as a model, examining the desorption behavior of pharmaceuticals and pesticides bound to carbon nanomaterials in fish gastrointestinal systems, and exploring the impacts of heavy metals to aquatic organisms under varying pulsed exposure and water quality conditions, and examining the presence and impacts of environmental toxicants in developing countries including Haiti and Zambia.